Can a second-screen trackpad really help your productivity? 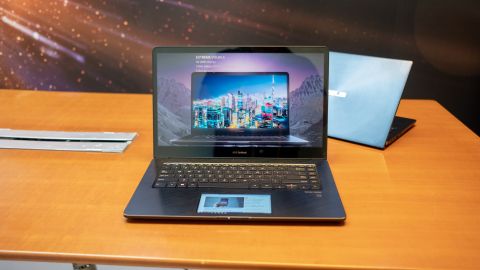 The laptop trackpad has been around for a good many years now, but apart from growing in size and improving on sensitivity levels, precious little about it has changed – until now. While we’ve checked out the Asus ZenBook Pro before, Asus unveiled a rather interesting version of it at Computex 2018 that aims to change how you look at the traditional laptop trackpad.

Asus has decided to pull out all the stops and introduce a laptop that it had specifically created for designers and creators, which could easily tackle things such as photo and video editing. To try and make things even more productive, Asus has thrown away all notions of a traditional laptop trackpad and replaced it with a second screen, which it calls the ScreenPad.

The design of the ZenBook Pro doesn’t stray far from what we’ve seen in this series before. It comes in a Deep Dive Blue with a slight gold/copper trim, and Asus’ popular concentric design pattern adorns the lid. The brushed finish continues on the inside, suggesting that this laptop means business.

You’ve got a nice bit of screen space to play with here, thanks to the thin bezels at the top and sides of the display. The 15-inch model packs a 15.6-inch LED backlit display, offering either a Full HD resolution with optional touchscreen, or a 4K display with touchscreen and support for the Asus Pen stylus.

The display also has a Delta E color accuracy value of less than 2 (1.02 was measured during the Asus demo), as well as 132% sRGB and 100% Adobe RGB. This makes it a great option for video and photo editors who can spend a lot of time tweaking their displays to ensure color accuracy throughout a project.

Connectivity-wise you get two USB Type-C ports (one port gets dropped on the 14-inch model), two USB Type-A ports, a full-sized HDMI port, audio ports, and a microSD card reader. You could therefore in theory have three external monitors connected to the ZenBook Pro, as well as using the laptop’s own screen to bring the total up to four (Asus points out that if you include the ScreenPad it comes to five displays in total, but more on that shortly).

Power is another thing the ZenBook Pro seems to flaunt easily, featuring up to an Intel Core i9-8950HK CPU on the 15-inch model, and an Intel Core i7 processor on the 14-inch. You’ll also get up to 16GB of RAM, a 1TB PCIe SSD, and an Nvidia GeForce GTX 1050Ti graphics card. There’s enough power here to ensure that the ZenBook Pro is more than capable of handling whatever you throw at it.

The main talking point about the ZenBook Pro, though, is the ScreenPad. This 5.5-inch Full HD display doubles as your standard trackpad, but hides plenty of tricks that enable it to adapt to what you’re doing on your laptop.

By default it behaves as a second screen that can act as an app launcher, or can offer quick access to program functions, depending on what you’re running. Microsoft has teamed up with Asus to offer this functionality in its Office suite, so if you fire up an Office application you’ll see shortcuts on the ScreenPad for quickly adjusting things such as font formatting with just a few simple taps, instead of navigating through the program’s toolbars.

Outside of Microsoft Office, the ScreenPad can also pull up a calculator, calendar, or music controls. There’s even an extension in Google Chrome that provides media controls for when you’re watching videos on YouTube.

You can also use the ScreenPad as an additional (but tiny) extension to your Windows desktop. Once this mode is active you can drag pretty much any application down to the ScreenPad, and it will stay there. There’s also the ability to mirror your smartphone to the ScreenPad via an app from Asus, but that’s coming at a later date.

While the ScreenPad is something new for Asus, it’s a concept we’ve seen other manufacturers adopt and then quickly abandon. The ScreenPad Pro itself can be confusing to use when in Extended mode, as you have to remember to use the cursor to manipulate things and not just tap on them as you would on a touchscreen.

Asus will be allowing developers to tinker with the ScreenPad to develop apps or extend existing program functionality, but only time will tell whether or not developers will find compelling uses for the feature. It’s also worth noting that keeping the ScreenPad on for any length of time will drain the ZenBook's battery, so it’s best to keep it switched off if you don’t need it.

The Asus ZenBook Pro is certainly a great laptop to consider if you’re in the market for something that behaves similarly to Apple’s MacBook Pro. This laptop is clearly designed for creative types, and while we would have liked to see something a bit more powerful than a 1050Ti graphics card, there are plenty of other saving graces here.

On the other hand, Asus is going in strong with the ScreenPad, and while it’s an interesting feature to have on a laptop it’s too early to tell just how useful it’s going to be, or if developers will even attempt to provide support for it in their programs. Regardless, it’s a bold move from Asus – and getting people excited about a trackpad is an achievement in itself.