13 Oct 2020 September 26, 2016
Inside a beautiful multi-million-dollar house in San Francisco on Wednesday, the company set up a model smart home outfitted with every Google device and connected home gadget imaginable.
The one-day demo highlighted an assortment of new Google Assistant features coming in the weeks ahead. There are recipe recommendations on smart displays and custom alarms for children recorded by actors from popular cartoons.
The tour was also a chance to see how Google (GOOGL) imagines people living, parenting and even sleeping surrounded by its products.
Smart speakers have given new life to the smart home market, which was struggling to move past its early-adopter beginnings before Amazon's (AMZN) voice assistant Alexa came along. Now the major companies, including Amazon, Samsung, Apple (AAPL) and Google, are fighting to lure customers into their own ecosystems.
The assistant personalities are different, but the applications are mostly the same.
In Google's model home, most appliances are either internet-connected or plugged into a smart plug that lets you turn them on with a voice command. Communication is constant and everywhere — between rooms and family members who aren't in the house.
A feature lets a member of the household broadcast a message to every room, such as "I'll be home in 20 minutes, start the rice maker." It'll now let the person at home reply, so it's like a phone call or text message conversation but through speakers.
In addition, Google smart displays will now show recommended recipes based on the time of day and year. If you make a mess while cooking, just ask Google to send out the robotic vacuum. 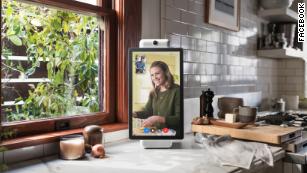 Parenting is the newest hot area for voice assistants, and the Google house was set up to show how it could work for a family with kids. Ask Google Assistant to read your children a bedtime story, and it can tell them stories about Dora the Explorer and PAW Patrol. If you'd prefer to read your kids a book yourself, you can ask Google Assistant to "read along" with a book it knows and it will play matching music and sound effects in the background.
Parents are increasingly using alarms to help time kids' screen time, tooth brushing or studying. To build on this, Google Assistant is adding alarms voiced by characters from Teenage Mutant Ninja Turtles and LEGO City. If you want to wake up your children without walking to their room, you could ask Google to turn up the lights or play music in their room while you sip coffee downstairs.
Upstairs in the master bedroom, adults can unwind by asking Google to put their phone on silent mode. The next morning, an alarm will go off and trigger a routine, automatically starting a coffee maker near the bed and reciting the day's weather and headlines.
Voice assistants may have started in a single room for playing music, but Google's house previews a future where almost every room has an always-listening microphone, a speaker, camera and a screen of some sort. (There was no bathroom demo on the tour, but it's safe to say they'll be there soon too.)
The future Google is selling can seem unnecessary and sometimes pricey, but it could be incredibly convenient for a busy family. Unless the power goes out. Then they'd just have to sweep and parent on their own.
Resources: https://edition.cnn.com/2018/11/14/tech/google-demo-home/index.html
tags : Google, Business, future, virtual, smart, company, imaginable