(CNN Business)It's a nightmare product-release scenario, even for Apple: A raging pandemic has infected millions, including the President, and forced millions of Americans out of work. A reckoning with racial injustice has swept across the country. And in the company's home state of California, record-breaking wildfires blaze.

That's the backdrop as the world's most valuable public company prepares to unveil its latest iPhones, which are expected to be shown off on Tuesday during a virtual event streamed from its website. Apple held a similar event a few weeks ago, but that was before President Donald Trump tested positive for Covid-19 and the ensuing turmoil. It was also for products not quite of the stature of the iPhone.
Apple (AAPL) is likely to announce an iPhone 12 with 5G capabilities as its new flagship phone, making it the first iPhone that can connect to the latest, speediest wireless networks. It will certainly be among the most advanced and finely designed smartphones on the market. It could cost over $1,000, too. And while the company will sell millions of the devices — the smartphone is, after all, increasingly indispensable and, for some, their sole computer — it's a big ask at a bad time for financially strapped consumers.
The last time Apple released a phone into so much economic uncertainty was the iPhone 3G in July 2008, when the United States was already in a recession and just before the financial crisis escalated with the bankruptcy of Lehman Brothers. Now, Covid has cast a shadow over all aspects of life in 2020, including smartphone upgrade cycles, and not even Apple is immune. The company typically announces new iPhones in September, but this year the pandemic disrupted supply chains and so it previously announced that the smartphones would ship out later than usual.
When the newest iPhones arrive, they'll be released in a vastly different economic and social environment than those in the past. An unknown number of people who just months ago planned to upgrade this fall to the latest and greatest iPhone now find that unthinkable due to Covid-related job losses and similar financial fears. Apple has been moving into luxury territory for years and, for many, a flagship device is now downright decadent.
And even for consumers who can afford it, it may be hard to justify the expense of a handset that may top $1,100 (the starting price of Apple's currently largest, highest-end iPhone, the 11 Pro Max). If past iPhone releases are prologue, a new top-of-the-line device will include upgrades like a better camera and processor, and perhaps some tweaks to its industrial design. After 13 years of iPhones, changes tend to be incremental rather than revolutionary. Such improvements may not feel as necessary if your commute is currently from the bedroom to the couch, where you might not have (or need) access to a 5G network. 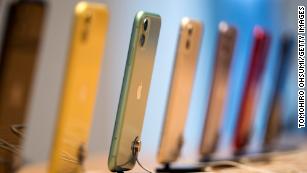 The less quantifiable benefits of the iPhone may also be dampened by the current climate. For decades Apple has been hailed as a vanguard of knowing what consumers want before they themselves are aware of it. Products like the iPhone, iPad, and Apple Watch set style trends and exude an ineffable coolness, more so than any other consumer electronics company. If part of the appeal of these gadgets is showing them off publicly while using them, what happens when we're hardly socializing in person?
Despite the current environment, sales to the early adopters who are typically among the first to buy new iPhones may not be impacted, Carolina Milanesi, an analyst at Creative Strategies, told CNN Business. But three to six months after release it could be evident that mainstream shoppers are either holding off on buying a phone or going for a less expensive iPhone model. Apple's cheapest current iPhone is the second-generation SE, which starts at $399, and the company typically drops the price of the previous year's model when a new one comes out.
Resources: https://edition.cnn.com/2020/10/13/tech/iphone-12-covid/index.html
tags : iPhone, shoppers, Products, consumers